Is Lane Splitting Legal in California?

Lane splitting involves driving a motorcycle between the rows of vehicles that are stopped or are slow moving. For example, if a cyclist or motorcyclist is on a two-lane street with both cars on each side driving slowly, the cyclist would move in the middle to pass them.

In almost all of the United States, lane splitting is illegal or highly restrictive. However, in California, it’s legal. 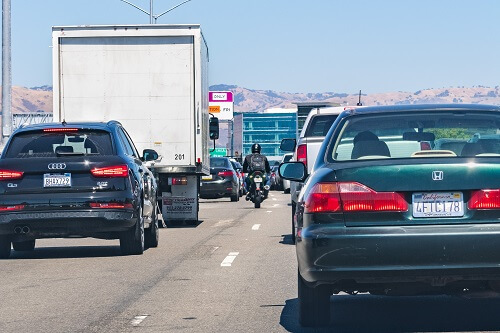 It Has Always Been Legal

One misconception is that lane splitting was only legalized by California's government recently through the 2016 Assembly Bill 51. This bill, signed by Governor Jerry Brown, defined lane splitting. However, this bill only cemented its legality and clarified the definition of lane splitting. Lane splitting itself has never been an illegal act.

However, this action is not legal throughout most of the US. In some states, lane splitting can lead to fines and other punishments. When driving a motorcycle in another state, be mindful of local laws to avoid legal trouble.

Why is it Legal in California?

California is a state that sees more traffic than the rest of the US. Lane splitting allows motorcycle drivers to move forward when more oversized vehicles cannot, thus reducing congestion. Research from the University of California also revealed that lane splitting is safe for motorcyclists as long as they follow guidelines. Because of these factors, there is little reason for California to make lane splitting illegal.

Because California tends to be the first state to legalize something that the rest of the world hasn’t, we expect lane splitting to eventually become legalized in other states, particularly as the population increases.

It is worth mentioning that lane splitting is not riding on the shoulder. This act is illegal.

Your Rights as a Motorcyclist

When you're riding on your motorcycle, knowing your rights can prevent you from legal trouble and hold those who break the law accountable. If someone claims you are breaking the law by lane splitting, it is legal for you to do so. If a driver tries to block your way, this is illegal. Some drivers might believe lane splitting is prohibited and will try to prevent you from moving by opening the door or blocking your path. This act is against the law.

Although lane splitting is legal in California, it is often a common cause of motorcycle accidents. Vehicle drivers often switch lanes suddenly and without looking which often can cause collisions with motorcyclists who are lane splitting. However, like any instance of driving, the motorcyclist needs to ensure the safety of all drivers and their own safety as well. The faster the motorcyclist drives, the more dangerous the act is. Therefore, a motorcyclist must consider the environment as they lane split. For example, if the lighting is poor or there is a larger vehicle ahead, it might not be safe to lane split.

Always wear reflective clothing as well, as this will help drivers spot you. Avoid being in a driver’s blind spot for too long.

If you can, use the far left lane to split. This action ensures that you have the most safety when lane splitting.

As long as you follow regular traffic laws, you can lane split without worrying about legal consequences.

Get Help With a Free Consultation from JCS Law Firm

We hope that you never have an accident while riding. Whether you’re riding a motorcycle or a bicycle, we encourage you to follow all safety precautions on the road.

If you've been injured in a bicycle or motorcycle accident, it’s important to speak with an experienced personal injury attorney as soon as you can. Contact us online or call our office directly to schedule your free consultation with one of our personal injury attorneys. We have been helping motorcycle and bicycle accident victims since 2013 and serve clients throughout Southern California. You can also request our free Your Personal Injury Guide: 10 Things You Should Know About Your Personal Injury Case guide to learn more about these accidents.

Our Results Speak for Themselves