When Can You Bring A Claim Against A Business For Slipping Or Tripping And Falling In Their Store?

You can sue either a private entity such as a supermarket, restaurant or other business establishments if you were injured as a result of a dangerous condition on its property. 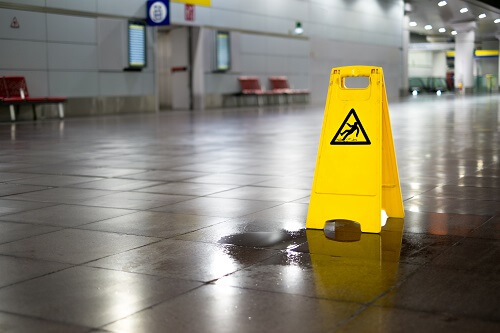 The California Supreme Court reviewed the law regarding a store owner’s liability for injuries to a business invitee (that is, a store customer) caused by a dangerous condition in Ortega v. Kmart Corp. (2001) 26 Cal.4th 1200, 114 Cal.Rptr.2d 470, 36 P.3d 11. In Ortega, the plaintiff was shopping at a Kmart and slipped on a puddle of milk on the floor. However, the plaintiff had no evidence of either the source of this dangerous condition or the length of time it existed before the accident. The Ortega court first recounted the settled law on establishing liability. Underlying this facet of California law is the principle that a store owner is not an insurer of the safety of its patrons. Nevertheless, the owner does owe the patrons a duty to exercise reasonable care in keeping the premises reasonably safe. (Ortega v. Kmart Corp., supra, 26 Cal.4th at p. 1205).

A store owner exercises ordinary care by making reasonable inspections of the portions of the premises open to customers. (Ortega v. Kmart Corp., supra, 26 Cal.4th at p. 1205, 114 Cal.Rptr.2d 470, 36 P.3d 11.) The care required is commensurate with the risks involved. (Id.) Thus, for example, if the owner operates a self-service grocery store, where customers are invited to inspect, remove, and replace goods on shelves, the exercise of ordinary care may require the owner to take greater precautions and make more frequent inspections than would otherwise be needed. The owner must safeguard against the possibility that such a customer may create a dangerous condition by disarranging or dropping the merchandise. (Id.) “However, the basic principle to be followed in all these situations is that the owner must use the care required of a reasonably prudent [person] acting under the same circumstances.” (Id.)

Actual Or Constructive Notice To Establish Liability Of A Store Owner

“Because the owner is not the insurer of the visitor’s personal safety, the owner's actual or constructive knowledge of the dangerous condition is a key to establishing its liability.” (Ortega v. Kmart Corp., supra, 26 Cal.4th at p. 1206, 114 Cal.Rptr.2d 470, 36 P.3d 11.) In the absence of actual or constructive knowledge of the dangerous condition, the owner is not liable. Moreover, where the plaintiff relies on the failure to correct a dangerous condition to prove the owner's negligence, the plaintiff has the burden of showing that the owner had notice of the defect in sufficient time to correct it. (Id.) In contrast, if the burden of proving lack of notice were placed on the owner in a slip-and-fall case, failure to meet the burden would require a finding of liability and effectively render the owner an insurer of the safety of those who enter the premises. (Ibid.)

However, the plaintiff need not show actual knowledge where evidence suggests that the dangerous condition was present for a sufficient period of time to charge the owner with constructive knowledge of its existence. (Ortega v. Kmart Corp., supra, 26 Cal.4th at p. 1206) Whether this condition has existed long enough for a reasonably prudent person to have discovered it is a question of fact for the jury. (Id. at p. 1207) There are no exact time limits. Rather, each accident must be viewed in light of its own unique circumstances. (Id.)

Thus, where, as in Ortega, there is no direct evidence of the length of time the dangerous condition existed, the plaintiff can demonstrate the store owner had constructive notice of the dangerous condition by showing that the site had not been inspected within a reasonable period of time. (Ortega v. Kmart Corp., supra, 26 Cal.4th at p. 1212.) In other words, the plaintiff may raise an inference that the condition existed long enough for the owner to have discovered it. (Id. at pp. 1212–1213.) “It remains a question of fact for the jury whether, under all the circumstances, the defective condition existed long enough so that it would have been discovered and remedied by an owner in the exercise of reasonable care.” (Id. at p. 1213.) Nevertheless, it is still the plaintiff who has the burden of producing evidence and who must prove that the owner had constructive notice of the hazardous condition. (Id. at p. 1212)

Without this knowledge requirement, certain store owners would essentially incur strict liability for slip-and-fall injuries, i.e., they would be insurers of the safety of their patrons. For example, whether the french fry was dropped 10 seconds or 10 hours before the accident would be of no consequence to the liability finding. However, this is not to say that a store owner’s business choices do not impact the negligence analysis. If the store owner’s practices create a higher risk that dangerous conditions will exist, ordinary care will require a corresponding increase in precautions.

Therefore, whether you have a viable claim against a business if you slip and fall or otherwise injure yourself on their property in California revolves around whether a dangerous condition existed for a sufficient period of time to establish constructive notice on the part of the business owner. This can be proven by establishing that the premises were not inspected for a certain period of time to establish constructive notice.