What is a Wrongful Death Lawsuit?

In California, a wrongful death claim occurs when a person dies as a result of the carelessness or the negligence of another person or entity. Losing a loved one due to the negligent conduct of another person or entity may be the hardest thing that anyone has endured. That other person’s or other entity’s negligence or carelessness must have caused in whole or in part the death of the person.  A wrongful death case is a civil matter; it differs from a criminal case that is initiated by the government. Therefore, the result of a wrongful death lawsuit is monetary damages, in which the wrongdoer if found responsible have to pay money to the claimants.  As opposed to a criminal case, no one goes to prison.

A civil wrongful death lawsuit also has a different, and less onerous, burden of proof than the proof “beyond a reasonable doubt” standard in criminal cases. In civil matters, the plaintiff bringing the wrongful death lawsuit has to prove that the defendant was negligent and was responsible for the death by a preponderance of the evidence, which is “more likely true than not.” This is equivalent to being slightly more than 50% certain that the defendant is responsible for causing the decedent’s death. 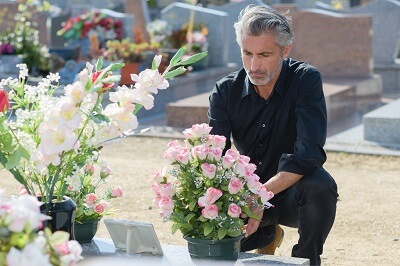 Why Bring A Wrongful Death Case?

In our society, we do not believe in “eye for an eye justice.” The person or entity responsible for the death of your loved one will not be killed or die as a result of their negligent actions or inaction. If the person or entity’s actions were not intentional, the civil justice system is the only means to provide a remedy for the loss. Sometimes government entities or corporations may be responsible for the wrongful death. Although they cannot be held accountable in the criminal justice system, they can be forced to accept responsibility and be punished through the civil justice system. For example, this occurs when a defective product or dangerous condition on public property caused the death.

It is possible to make a difference and ensure that the actions or products that caused the death will cease and prevent future deaths. With a simultaneous survival action discussed in more detail below, the wrongdoer can also be punished for their actions that caused the decedent’s death with punitive damages.

When an adult who is a parent or who is financially responsible for others dies, there can be significant economic damages, in terms of lost financial support that the decedent would have provided to their children or their parents. In the event of a minor’s death, there can be lost future financial support, which would have been provided to the parents as the parents grew older and became unable to take care of themselves.  The only way to recover these lost economic damages is through the civil justice system.

Therefore, if your loved one died as a result of another person or entity’s negligence, you should consult a personal injury lawyer and consider bringing a wrongful death claim.

How Am I Awarded Money In A Wrongful Death Case?

Monetary damages in wrongful death cases can be divided into two categories: 1)  economic damages directly attributable to the death and losses to surviving family members for the lost benefits and services they would have received had the family member not died and 2) non-economic damages that result from the decedent’s death.

Economic Damages directly attributable to the death are funeral, burial, and past medical expenses. Economic Damages attributable to the lost benefits or services are equivalent to what the surviving family members would have received had their loved one not died. This includes loss of financial support that the decedent would have contributed to the family during his/her life expectancy, loss of gifts or benefits that the surviving family members would have received from the decedent, and the reasonable value of household services that the decedent would have provided.

No fixed standard exists for deciding the amount of these non-economic damages. During a trial, jurors are instructed to use their judgment and common sense to determine a reasonable amount, based on the evidence presented in the trial.

Unlike personal injury claims, there are no economic damages for the surviving loved ones of the decedent for emotional distress. You cannot be compensated for your grief, sorrow, or mental anguish resulting from the decedent’s death.

The Difference Between A Survival Action And A Wrongful Death Action

These are damages incurred after the wrongful act but before the death,  These damages may include medical bills, lost wages, and personal property damage.  In the event the decedent survived for a sufficient period before dying, a surviving heir may bring a survival action to recover those economic damages. For example, in an auto accident, the heirs can bring a survival action to recover economic damages for the medical expenses of the ambulance and hospital, if the loved one did not pass away immediately.

The time and cause of death are often determined by expert medical doctors. If there is evidence that the decedent died instantaneously, there likely is no survival action.  However, On October 1, 2021, California Governor Gavin Newsom signed into law SB 447, which amended the California Code of Civil Procedure section 377.34 and expanded the monetary damages available to permit wrongful death claimants in California to recover damages for decedents’ pain, suffering or disfigurement before death. Before this law, under the California Code of Civil Procedure section 377.34, wrongful death claimants were not legally entitled to monetary compensation for the pain and suffering that the decedent suffered before death.

What Are The Advantages Of This New Law Expanding Wrongful Death Damages?

The advantages of this new law could result in increased monetary damages like pain and suffering before death is now compensable. Often delays in trial dates and other considerations cause someone to die before heading to trial or reaching a settlement and if a death occurred, the claimant would be precluded from obtaining pain and suffering damages.

This new law applies to all wrongful death complaints filed between January 1, 2022, and January 1, 2026, as well as to all existing wrongful death cases in which a motion for trial preference under California Code of Civil Procedure section 36 – under which trial must begin within 120 days of the granting of such a motion – had been granted in a personal injury action before the personal injury plaintiff died. The statute is scheduled to end on January 1, 2026, when the California state legislature will then re-evaluate the law. This law was enacted in part due to the delays that occurred in the court system as a result of the COVID-19 pandemic.

Contact Us for a Free Wrongful Death Case Evaluation

JCS Law Firm works with Southern California Wrongful Death clients, helping them recover the full amount of compensation they deserve. Contact us today to schedule a free, no-obligation consultation to discuss your case and get started filing your claim. With our client satisfaction guarantee, you have nothing to lose and everything to gain!

Be sure to check out our Free E-Book, 10 Things to Know About Wrongful Death Claims in California.

For helpful tips on what to do as your case progresses, sign up for our free newsletter.